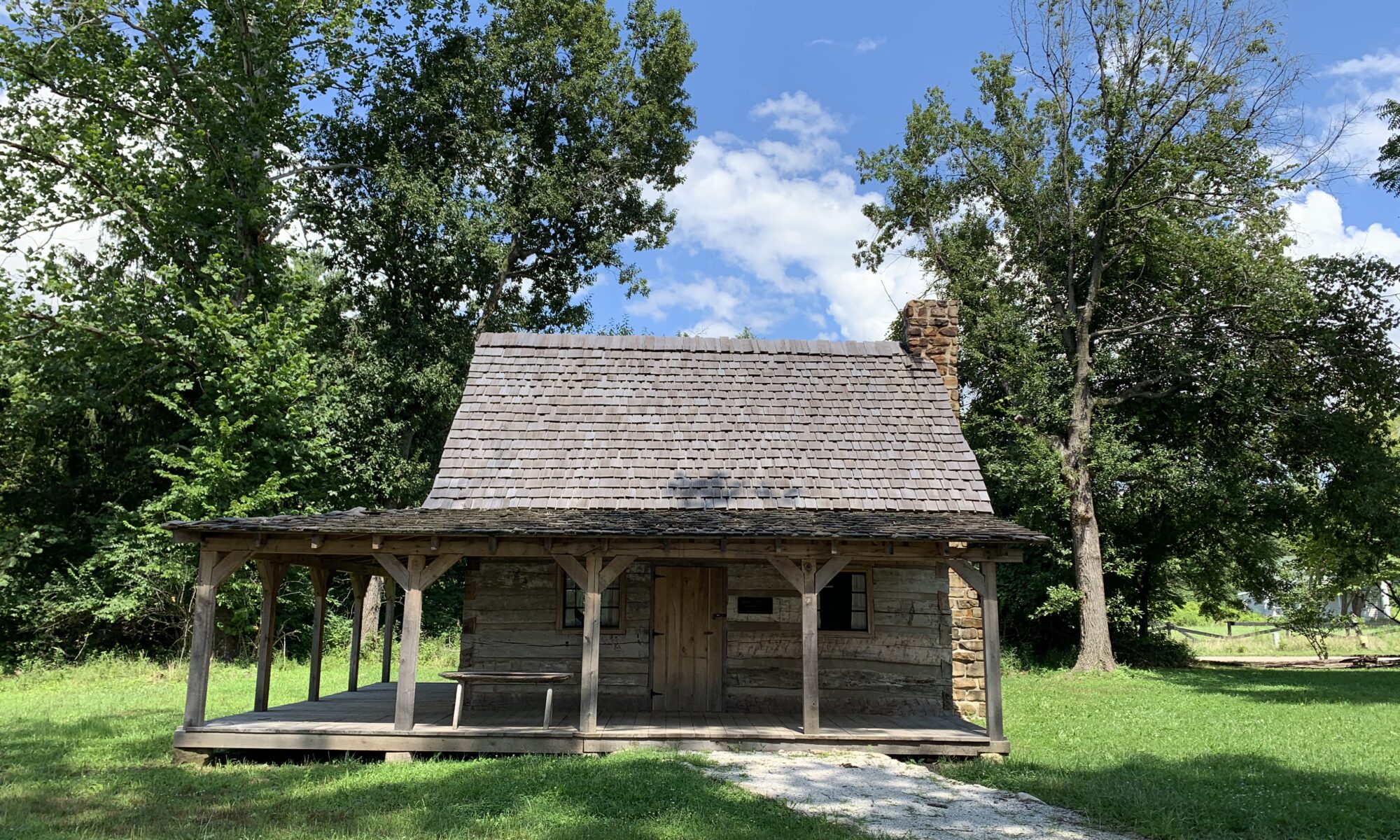 The Cochran Cabin was originally located northeast of Poland in Jackson Township, Owen County. Newly married Campbell Cochran, age 29, and his bride Jane, age 17, arrived in Jackson Township from their native state of North Carolina in 1825. They had walked the distance behind a horse and cart which carried all their possessions. Upon purchasing the land from the U.S. Government , they were recorded as the first white settlers in northern Owen County. They built the cabin on their land in 1825-1826 and continued living there until their deaths in 1888 and 1889. The Cochrans raised seven children. Their youngest son, William, continued to live in the cabin and farm the land until 1915. In the 1920’s and 1930’s, the cabin was used occasionally for tenant farmers. The cabin and farm remained in the Cochran family until late 1993 when the cabin was donated for the village in Fowler Park by Gordon Spelbring at the request of the Great-granddaughter Beulah Spelbring.

Cochran Cabin was a two room cabin; one room was above the other with a wooden staircase for access. The logs were poplar with V-notched ends. A fireplace downstairs provided heat for both levels and was used for cooking and light. The cabin was never modernized.

Staff dismantled the cabin in 1993 and completed reconstruction in September of 1995. Two poplar upright cabinets form the Preston House were added on each side of the fireplace by the staff.

An unfortunate accident occurred in fall of 2017, causing a fire and a loss of most of the Cochran Cabin. The Department was able to salvage the foundation and chimney from the original structure. In fall of 2017, a donation was made by the Haywood Trust to reclaim a cabin in Plummer Indiana located in Greene County. This cabin was roughly a match for the original structure of the Cochran Cabin and was rebuilt to the same specification as the old Cochran Cabin. During dismantle, it was discovered that a quarter of the logs were unusable. The two base logs were decided to be locust and were donated by the Gillin Family, the current cabin caretakers of the cabin since 2017. Although locust logs last much longer than other logs, they are difficult to to find long and straight enough for building a cabin.

The Cochran-Plummer Cabin was a two story cabin built in the early-mid 1880’s that had been added onto many times over the years. Dismantle was difficult, but the department was aided by the Greene County Highway Department in removal. Most of the logs were beech and V-notched. The Wabash and Erie Canal passed through the town of Plummer and it is thought that the original parcel owner and many cabin builder was a relative of the namesake for the town. Staff and volunteers completed reconstruction of the Cochran-Plummer cabin at Fowler Park Pioneer Village in winter of 2018. It was recorded as one of the coldest Novembers on record.